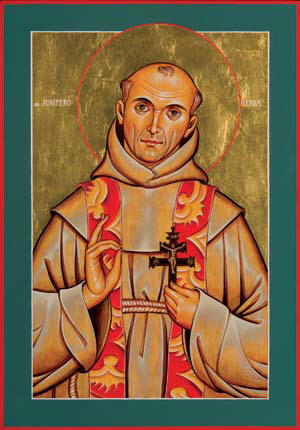 Born on Spain’s island of Mallorca on November 24, 1713, he entered the Franciscan Order and until he was 35, spent most of his time in the classroom as a student of theology and then as a professor. He gave it all up to do missionary work in America, desiring to evangelize in the New World.

Arriving by ship at Vera Cruz, Mexico, he and a companion walked the 250 miles to Mexico City. On the way Junipero’s left leg became infected by an insect bite and would remain a cross to bear for the rest of his life. For 18 years, he worked in central Mexico and in the Baja Peninsula, traveling thousands of miles to preach, teach, and administer the sacraments.

In 1769, Fr. Serra joined Captain Portola’s expedition to Alta California to continue exploration, bring Christianity to the north and establish missions. July 1 is the day he crossed into Alta California on his way to found Mission San Diego.  The second mission was San Carlos Borromeo in Monterey but, in 1771, it was moved to Carmel and served as his headquarters, where he oversaw the planning, construction and staffing of each mission.

In his 14 years in California, Fr. Serra established 9 missions, including our own Mission San Buenaventura to serve the spiritual needs of the Chumash people. Another 12 missions were founded along the El Camino Real after his death. Junipero’s missionary life was a long battle with pain, cold and hunger, with unsympathetic military commanders and often with potential deadly situations . Through it all his unquenchable zeal was fed by prayer each night, often from midnight till dawn. Traversing the coast of California, he baptized over 6,000 people and confirmed 5,000. On August 28, 1784, at the age of 70 Father Junipero Serra died at Mission San Carlos Borromeo and was buried there the next day under the sanctuary floor.

The word that best describes Junipero is zeal. It was a spirit that came from his deep prayer and dauntless will. “Always forward, never back” was his motto. Just as was the case with Serra, who was all about the indigenous people, parishes aren’t about buildings. They are about people, and if we’re going to build anything, let it be the reign of God in our midst. Who we are and what we do are the direct results of the labors of a saint, our own Junipero Serra. Our efforts are also aimed at helping each and every one of us to encounter Jesus, become His disciples, and ultimately become saints ourselves.